For decades the FTC has been warning people about online ports, portals, and pop-ups that can be conduits for questionable claims. But companies shouldn’t think we’ve taken our eye off another potential doorway for deception: direct mail. According to an FTC lawsuit, a group of seven U.S. and Canadian defendants used glossy magazine-style mailers to advertise that Neurocet, Regenify, and Resetigen-D could treat a list of diseases, maladies, and conditions long enough to fill Gray’s Anatomy – the book and the show. 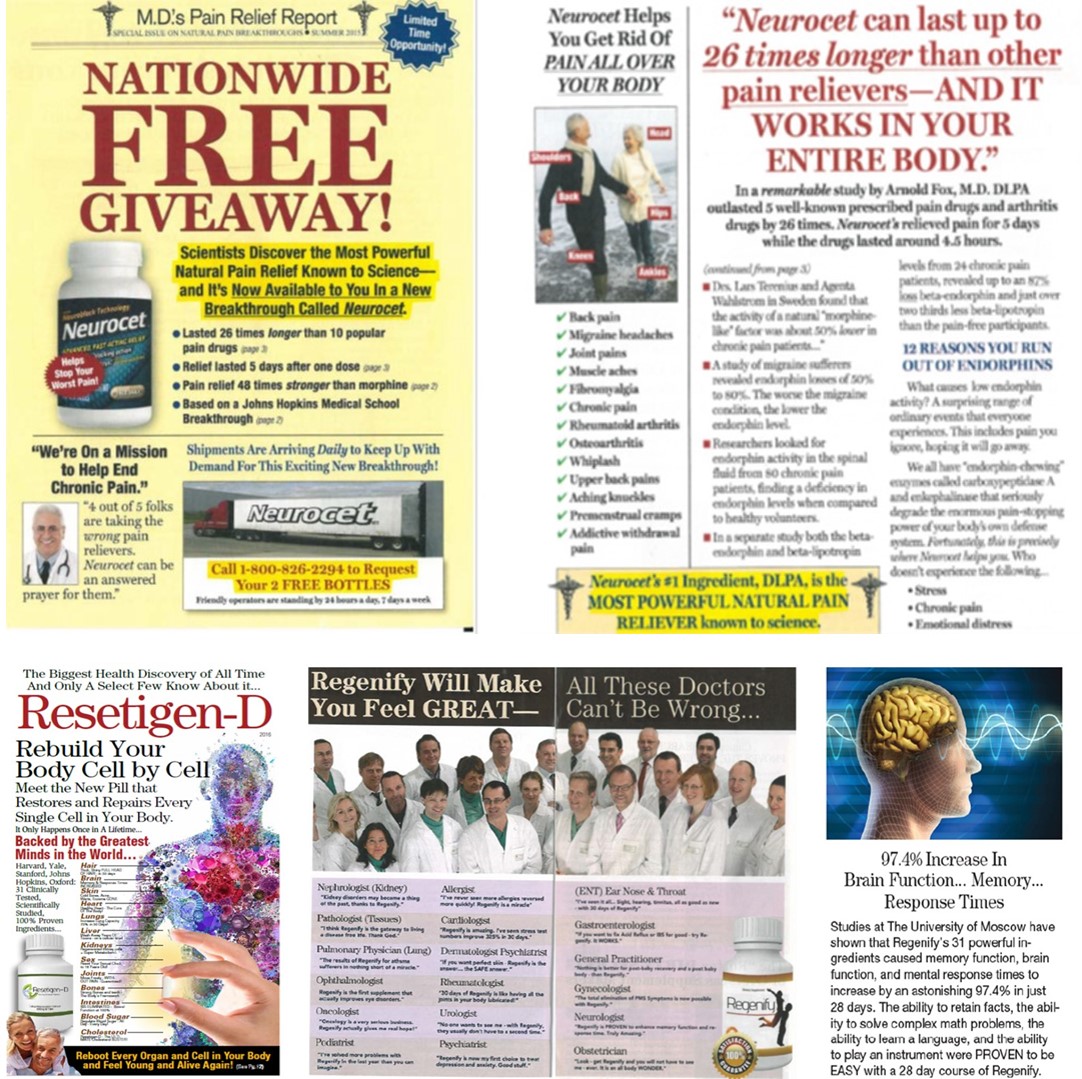 The defendants pitched Neurocet as an answer to the kinds of chronic pain that often besets older consumers, including arthritis, back pain, and headaches. What’s more, they promised that Neurocet provides relief that lasts 26 times longer than popular pain medications and is even stronger than morphine, leading to reduced inflammation and greater mobility and flexibility. And just to gild the pain relief lily, they said their claims were supported by scientific or clinical proof.

They advertised Regenify and Resetigen-D to repair cell damage everywhere in the body, turning back the clock on damage to skin, tissue, bones, and organs while also improving memory and brain function by as much as 97.4%. That’s just for starters. The ads also pitched the products as a treatment for arthritis, tinnitus, asthma, high cholesterol, psoriasis, and eczema. Oh, and users would lose weight and gain muscle.

Skeptical? Don’t be, implied the defendants. Ads for Regenify and Resetigen-D featured glowing testimonials from people who had supposedly tried the products. They also trotted out purported endorsements from gastroenterologists, neurologists, nephrologists, pulmonologists, cardiologists, rheumatologists, and pretty much every other kind of –ologist who’s ever donned a white coat.

The complaint charges the defendants with making “false or unsubstantiated claims.” Others might use stronger language to describe the practice of targeting older consumers in this fashion, especially considering the defendants didn’t have scientific support for their representations and used purported endorsements from medical professionals and consumers that were flat-out fictitious.

The proposed stipulated order puts provisions in place to protect consumers in the future and requires the defendants to turn over $1.3 million, which may be used for consumer refunds.

If you think you’ve seen a lot of cases from the FTC recently challenging misleading pain relief claims and deceptive treatments for maladies afflicting older Americans, you’re right – and there are good reasons why that’s the case. First, as the opioid crisis demonstrates, millions of people are desperate for relief from chronic pain. Second, with the Boomer Consumer demographic bump, more people are struggling with age-related medical conditions for which there are no easy cures. And third, the Venn diagram of those two groups overlaps substantially.

That’s why the FTC continues the fight against bogus treatments and cures, and why we wage the war regardless of whether marketers convey their questionable claims online, in direct mail, via telemarketing, or in social media.